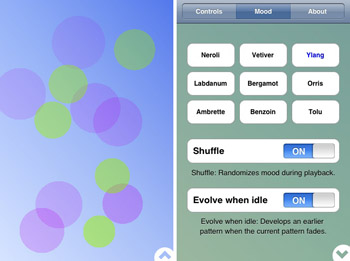 The father of ambient music, Brian Eno, has teamed up with musician/programmer Peter Chilvers to create a neat application called Bloom. Touted as a “part instrument, part composition and part artwork,” Bloom creates something what we could call a new instrument designed specifically for the iPhone and iPod Touch.

The idea is to tap a colored screen in various places and produce your own music. After you’ve finished tapping, the newly created track is played in a loop, thus creating a new music on the fly. While music is played, the tones appear as colored spots that slowly fade.

In addition to creating your own music, Bloom can also create songs on its own using some form of random algorithm…

To sum it up, this application certainly won’t help you be more productive, but it could definitely help you relax from time to. Four bucks is all they ask and once you try it out, you should love Bloom.

Apple is now rumored to have met and surpassed their goal of shipping 10 million iPhones for the year. That's...