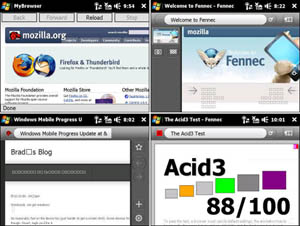 Rumors had it that a Firefox Mobile alpha might be appearing in the near future. On the heels of those rumors, wouldn’t you know it, screenshots of the alpha (code named ‘Fennec’) have emerged. The screenshots are obviously taken on a Windows Mobile device as you can see above.

I’m eager to see the alpha on other platforms… BlackBerry and iPhone… ahem… Firefox for the iPhone? Wouldn’t that be something? I highly doubt Apple would let Firefox into their App Store to compete with Safari, seeing as they’re working day and night to make Safari the best it can be. Apple holds all the cards and are in the position to shun any potential competition from the App Store.

In an interview with Wired Magazine, Mozilla CEO John Lilly explained why Firefox will not be coming to the iPhone any time soon:

Wired: Are you going to develop a version of Firefox for the iPhone?

Lilly: No. Apple makes it too hard. They say it’s because of technical issues – they don’t want outsiders to disrupt the user experience. That’s a business argument masquerading as a technological argument. We’re focusing on more important stuff. The iPhone has been influential, but there’s not that many of them. We’re part of the LiMo Foundation – Linux on Mobile. The Razr V2 is a LiMo phone, and you’ll see more in the next year or so.