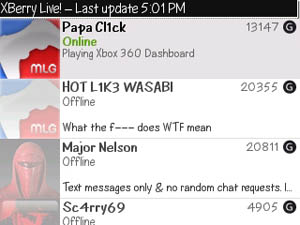 Calling all BlackBerry addicts that also happen to be huge Xbox fans… I’ve got a new beta app to report on today that will make your day. If you’ve ever wanted to check the status of your friends on Xbox Live, and see what they were playing… Wait no longer, the app is here for your BlackBerry.

It’s called Xberry Live. With it, you can see who’s playing, what they are playing, and what games they’ve played in the past. You can add anyone with an Xbox Live Gamer Tag to your list.

The app is in beta, so be forewarned that there will be issues and bugs to work out. That said, it looks really promising. Xberry should work on BlackBerry’s in the 81xx, 83xx, 87xx, 88xx and 9000 series, as long as you’re running OS 4.2.1 or newer.

To download OTA, type in this URL in your BlackBerry’s web browser:
http://jxl.me/xberry/xberrylive.jad