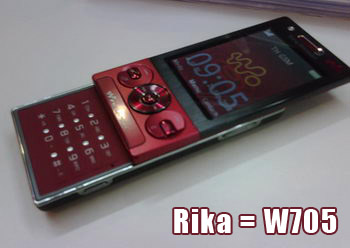 We told you the leaked Sony Ericsson Rika reminds us on the G705 model. Simply replace “G” with “W” and you’ll get the model number — yes, it’s the W705!

Specs wise, the stylish slider will boast a QVGA (240×320 pixels) screen, 3.2 megapixel camera, WiFi and aGPS. That’s a lot for the feature phone and I would expect to see some VoIP app released for this and other (G905?) Sony Ericsson WiFi-enabled feature phones.

Anyway, from what we know, the W705 will be announced later this month and will start selling from February next year.

This post is about two news, one good and the bad one. The good news is that the Nokia's all-touchscreen...