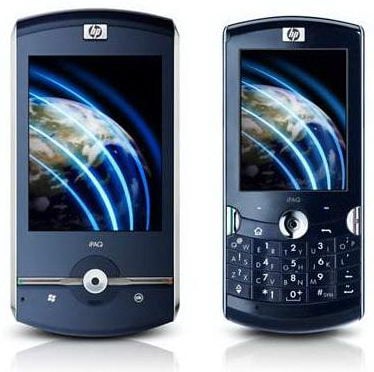 HP unveiled two new smartphones – HP iPAQ Data Messenger and HP iPAQ Voice Messenger, with one of them sporting a touchscreen and the other one a ROKR-style QWERTY keyboard. Let’s go briefly through each of the devices announced.

First comes the HP iPAQ Data Messenger, which prides itself with a 2.8-inch touchscreen which unfortunately doesn’t go beyond QVGA (320×240 pixels). However, there’s a slide-out QWERTY keyboard on board, making the Data Messenger look like a TyTN II competitor.

The other device, HP iPAQ Voice Messenger, comes with a 2.4-inch QVGA non-touchscreen, and the mentioned QWERTY keyboard which is fitted into an alphanumeric keypad — that’s two characters per key on its 20-key alphanumeric keypad.