The T-Mobile G1 launch announcement culminates months, nay a year, of speculation on mobile phone powered by a new mobile OS from Google. At first we were mis-guided in thinking that the Google had a new piece of hardware, the Google Phone (or gPhone, if you will), would be manufactured by the likes of smartphone-making experts HTC. It was unclear at the time whether the Google Phone (gPhone) would hit market with a tried and true mobile OS like Windows Mobile or make a play at creating a new mobile platform.

Then there were rumors that HTC was indeed the genius behind the gPhone. Rumors abounded throughout the blogosphere that the HTC Dream was the handset to usher Google into the mobile phone game. Alas, news of Google’s Open Handset Alliance and their launch of the Android OS platform dashed our hopes that Google would enter the handset market. Turns out, Google isn’t aiming at the hardware segment, but rather would concentrate its resources into the new open-source, Linux-based mobile OS known as Android. There would be no singular Google Phone, but rather a slew of new smartphones powered by Google’s Android OS.

No matter, the HTC Dream soon resurfaced as the prototype handset to bring Android to the masses. HTC was indeed on board as the manufacturer of this first Android handset and would keep things under wraps until mid-2008.

Rumors were validated when T-Mobile announced that they would be launching the first-ever Android smartphone as the T-Mobile G1 – the very same HTC Dream handset that we’d seen in leaked pics and live demonstrations countless times already. The HTC Dream would henceforth be known to the world as the T-Mobile G1. Sporting an interesting slide-out QWERTY keyboard form-factor, complete with an angled “chin,” the touchscreen smartphone promised huge functionality backed by a seriously open-source development community. 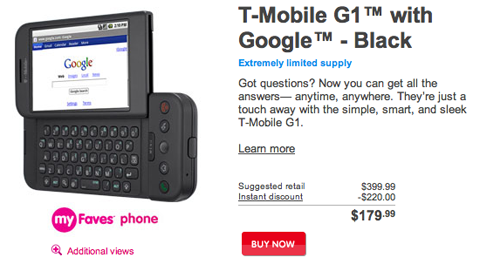 Today, the T-Mobile G1 (HTC Dream) is ready to pull duty as the premier Android handset. T-Mobile has the honor of ushering in Google’s new mobile OS, and is already running to keep pace with demand. The T-Mobile G1 features a quad-band (850/900/1800/1900Mhz) GSM/EDGE radio for true globe-trotting voice capabilities with a dual-band (1700/2100Mhz) UMTS/HSDPA radio to ensure 3G data speeds on T-Mobile’s US and European 3G networks. And, with a generously high-resolution 3.2-inch touchscreen display (HVGA 320×480), integrated GPS, WiFi, Bluetooth 2.0, 3 megapixel camera, QWERTY keyboard, and a microSD card slot – all powered by a Qualcomm MSM7210A processor running @ 528 MHz and backed by 256MBROM / 192MB RAM – the T-Mobile G1 doesn’t disappoint.

The T-Mobile G1, seeing as how it’s powered by Google’s mobile OS, features all manner of Google product support. From Google Maps to Gmail to YouTube, the G1 delivers as close to a desktop web-experience as possible. Find the T-Mobile G1 at a T-Mobile retailer near you, or through T-Mobile’s online store-front, for $180 after instant rebate.

Latest reports have Rogers Wireless up in Canada (eh?) selling the HTC Touch Diamond for $599.99 with no contract. These...