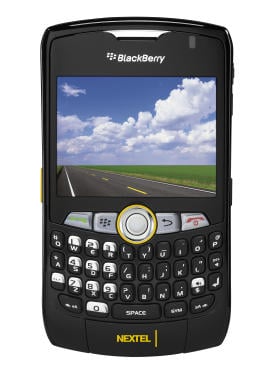 iDEN BlackBerry users in Latin America will be pleased with this announcement. RIM and NII Holdings have together announced the release of the BlackBerry Curve 8350i for Latin America. The release should happen sometime during the first quarter of 2009!

The BlackBerry Curve 8350i will be released in Argentina, Brazil, Mexico and Peru. The 8350i will be the first iDEN BlackBerry since the dusty-old 7100i. It will feature push-to-talk functionality and WiFi. There are roughly 10 million iDEN subscribers in North and South America. This would certainly mean there are have been a LOT of BlackBerry users waiting for this device!

Check out the full press release after the jump >

The BlackBerry® Curve™ 8350i smartphone and the industry-leading Push-to-Talk service will provide one-touch, instant and effective communication between NII subscribers in their home markets and with over 10 million iDEN subscribers in North and South America. In addition to enabling seamless access to personal and corporate email, the BlackBerry 8350i will also come with built-in Wi-Fi, a 2-megapixel camera, an internal antenna and a host of other features to help subscribers in Latin America push their business to new heights.

“Our high-value customers in Latin America demand high-performance wireless solutions that enable them to stay ahead of the game with enhanced productivity and flexibility,” said Greg Santoro, chief marketing and strategy officer, NII Holdings. “This powerful and feature-rich smartphone is a push for performance solution that combines the power of Push-To-Talk with the BlackBerry platform’s popular features. It will be the must-have handset for subscribers who need flawless instant communication tools to extend the reach of their business.”

“The BlackBerry Curve 8350i smartphone will offer customers an exceptional communications experience together with the popular push-to-talk service from NII Holdings,” said Mark Guibert, vice president of corporate marketing at RIM. “We are pleased to build on our successful relationship with NII Holdings in bringing this feature-rich smartphone to customers in Latin America.”

The BlackBerry® Curve™ 8350i smartphone is designed to deliver the features and services every team needs—day-to-day and year-over-year. Combining BlackBerry® data services such as email, messaging, organizer and Internet access with the immediate connectivity of Push-to-Talk, this new smartphone will help teams accomplish tasks and goals more effectively—saving both money and time.

With an eye toward productivity and to facilitate adoption, the BlackBerry® Curve™ 8350i smartphone is designed to easily integrate into the IT networks of organizations that use the BlackBerry® Enterprise Solution to address key business requirements such as:

The BlackBerry® Curve™ 8350i is designed to deliver the file storage space the working world requires. In addition to its 128-MB of onboard memory, the smartphone will accept microSD/SDHC cards for up to 16 GB of storage. Users will be able to store spreadsheets, images or pictures, and with the preloaded DataViz® Documents to Go® software users will be able to edit Microsoft® Word, Excel and PowerPoint documents directly on the smartphone, making them more productive and prepared wherever they go.

The BlackBerry® Curve™ 8350i smartphone will also feature built-in Global Positioning System (GPS). When used with BlackBerry® Maps or other location-based applications and services workers can access turn-by-turn directions and other navigation features so they can keep moving in the right direction.