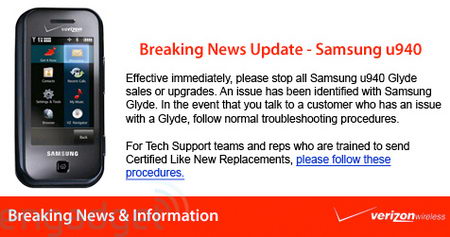 It seems Verizon Wireless has problems with the Samsung Glyde. According to Engadget, the Big Red is in the midst of pulling off the device from the store shelves. Furthermore, they’re not allowing customers to get their Glyde back if they send one in for service — instead, customers are offered the LG enV2 as a replacement.

Apparently, this information was received in a Verizon customer service call center and it’s not clear when (or if) corporate and non-Verizon stores will receive the same story. Are Verizon and Samsung preparing a new firmware for the Glyde or there are some serious problems with the QWERTY touchscreen phone? It’s hard to tell at this stage, but we’ll certainly keep our eyes wide open.

In the meantime, if anyone of you guys and gals have had problems with the Glyde, we’re eager to hear what do you think about this. Have you sent your device to Verizon? What did they say to you?

Orange to carry the HTC Touch HD in UK, O2 in Germany

HTC Touch HD is hitting Europe, big time. In Germany, the Taiwan-based smartphone maker secured a deal with O2, while...