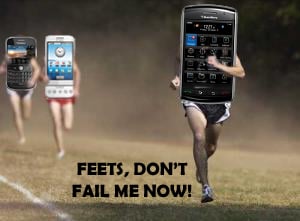 Based on a little search engine number-crunching, researchers have determined folks are a lot more excited about the upcoming BlackBerry Storm than the recently-launched HTC G1. It’s not a huge surprise since one is out there and available, while the other is still a topic of much speculation. We all knew Android would have a tough time making progress in an already-crowded mobile OS market, but has the excitement really been stymied that quickly? Even as a dedicated BlackBerry guy, I’m looking forward to what the G1 will bring to the table, despite the lacklustre hardware. On the flip side, the Storm’s hardware is pretty innovative as far as RIM goes – would it be fair to assume consumers are more interested in the hardware than they are in the apps?

It's good to know mobile game developers and publishers are joining the Android wave, as they'll add their contribution to...