It’s been a long and winding road, but it looks like AT&T has finally gotten their act together and is now offering iPhone owners FREE access to their AT&T WiFi HotSpots around the US, including those AT&T WiFi HotSpots in Starbucks coffee houses.

We’ve been expecting AT&T to give iPhone owners free WiFi service through the carrier’s network of thousands of AT&T WiFi HotSpot locations since the No. 1 US wireless carrier mistakenly announced the free WiFi offer several months ago, blaming “human error” for the announcement. AT&T then rolled out the free AT&T WiFi service again for iPhone owners, before taking the offer off the table the next day. 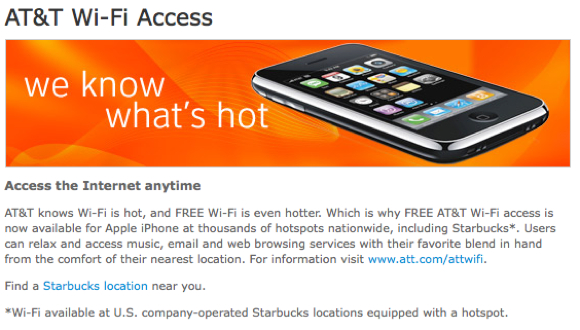 This time around, the free AT&T WiFi HotSpot access looks legit and bound to stick around for the long-haul. iPhone owners will now have free access to all of AT&T’s WiFi locations strewn across the US. So, between AT&T’s 3G network and AT&T’s WiFi HotSpots, iPhone 3G users are sure to have quick access to the web whenever and wherever they might need it.

BlackBerry Bold available at CompUSA for arm and leg, plus tax

AT&T is slated to release the BlackBerry Bold on November 4th., but if you just can't wait (or you were...