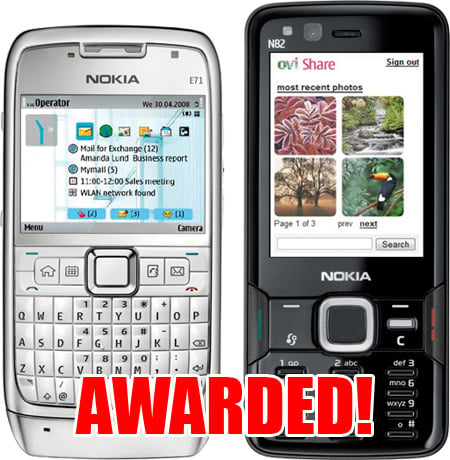 Two Nokia Symbian S60 smartphones were honered by Wired Magazine’s test issue. The first of the two is the Nokia E71, which I’m currently testing and honestly I’m not surprised to see it praised by Wired. The device nabbed the “Test Best Cell Phone” title, scoring nine out of 10, in the November issue, which is on newsstands now.

On the other end, Nokia N82 was awarded the “Test Best Camera Phone” accolade. Again, there’s nothing surprising here as we know the N82 packs a 5 megapixel camera with Xenon flash.

Naturally, Nokia used the opportunity to issue a dedicated press release. Nokia North America’s Craig Coffey commented: “Being recognized for the quality and beautiful design of our products is something we strive for with each device. The Nokia E71 winning the overall category honors and the Nokia N82 achieving top camera phone status really speaks to the unrivaled array of the Nokia portfolio as a whole.”

Hopefully, Wired’s coverage will help Nokia gain some extra fans in the U.S. and Canada…

Can any company force you to forego your natural right to sell your used mobile phones through second-hand channels like...