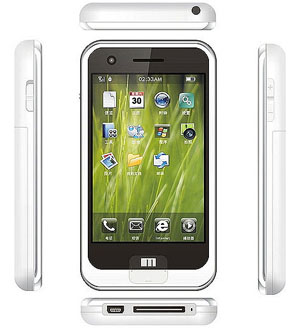 The evil-twin to the iPhone, the Meizu M8 (ok, maybe it’s not so evil), should be available before the end of this month. This news comes from a post by company head J. Wong.

The new iPhone touchscreen clone should be launched in China no later than November 30th… The only hold-up is with the Chinese government. Meizu is waiting on a government licence for the phone, but still plans on releasing a test version to users even if the licence isn’t granted (not sure that’s a great idea!?).

This launch is also joined by plans to release the device in other countries. First the M8 is slated to hit the Chinese and Indian markets, with WiFi disabled on the Chinese device to meet local requirements. Following that, the iPhone clone may make its way to Europe, Hong Kong and the US in time for Christmas.

The iPhone Clone from Meizu is based on a highly modified Windows Mobile interface. Even so, there are tons of references to the Apple device, including a Safari-like clone for web browsing.

For launch, the M8 is scheduled to sell for the equivalent of $348 USD for the 8GB version, and $421 for the 16GB edition. I’m sure we’ll hear much more about this in the days and weeks ahead!