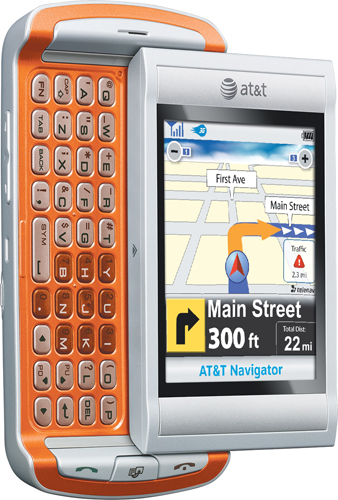 As rumoured, the AT&T Quickfire has been officially announced today. For $99.99 and a two-year ball-and-chain, you can nab this spiffy little slider in orange, silver, and lime green. It looks like they’re going to have promotional rates for early subscription, just like the other handsets launched from this batch. In terms of specs, the Quickfire enjoys a 1.3 megapixel camera, 3G, GPS, Bluetooth (including A2DP), and 35 MB of onboard memory plus a microSD slot.

The GTX75 is the final of four QWERTY handsets announced by AT&T last month, but of the whole lot, the dual-sliding Pantech Matrix remains the most popular. Still, they’re all healthy infusions to AT&T’s lineup, and with such generous price points on all of them, these mobiles are good deals for heavy texters. Even as a BlackBerry guy, I do kind of wish RIM would make a slider akin to the Samsung Propel, another brother of the Quickfire.

Luxury handset maker Mobiado is out with new products. First comes the Mobiado Professional 105 EM Special Edition, which is...