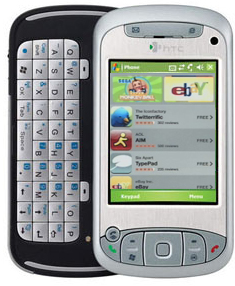 It turns out BlackBerry and Google aren’t the only one playing catch-up to the iPhone App Store – recent commentary from Microsoft CEO Steve Ballmer at a developer conference in Australia confirmed that they’re working on a similar software distribution channel. Of course, they’re not so willing to compare themselves to Apple; it sounded like they would actually be implementing something more similar to Facebook’s third-party application support.

“I actually will agree that there’s some good work, particularly at Facebook and also with the iPhone, where both of those companies have made it easier for developers to distribute their applications,” Ballmer said when asked whether Microsoft would provide a way for developers to create software and distribute it directly to users.

Bundle that together with previous rumours that Microsoft will be planting Zune software on Windows Mobile devices, we’re clearly going to be seeing some big things out of Windows Mobile 6.5. As is, there’s already a catalog of sorts, but initial reactions to the July launch were less than peachy. A lot of the other talk at the conference revolved around desktop software (namely whether or not anyone should care about Internet Explorer anymore), so it’s hard to tell how much of this software discoverability talk related to mobile, but with any luck we’ll see a service unified between Windows 7 and later versions of Windows Mobile.

For those of you that have been eagerly awaiting the launch of the LG Prada II this month... Looks like...