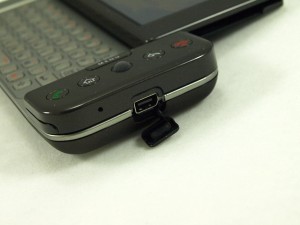 The T-Mobile G1 is made by our favorite Windows Mobile smartphone manufacturer, HTC. Known as High Tech Computers, HTC has made name for itself as the premier WinMo device maker in the world. You’ve likely used a Windows Mobile smartphone made by HTC in the past without knowing that HTC actually manufactured the handset. The G1 bears only two telltale clues of HTC’s hand in its creation – one logo along the display’s bezel and one logo adorning the battery.

HTC knows what they’re doing with smartphones, and they’re expertise really shows through on the T-Mobile G1. The touchscreen is sublime (more on that later). The keyboard provides great feedback and is easy to use (more, later). The trackball is a welcome change from the ubiquitous direction pad (D-pad). The soft-touch finish on the battery cover gives the G1 a refined in-hand feel.

Thanks to the huge 3.5-inch touchscreen and hard keyboard, the G1 is a bit bulkier than we had expected. It’s not going to have the model-esque waistline of the HTC Touch Diamond, but we expected the G1 to feel a bit slimmer. That’s not to say that the T-Mobile G1 is huge or feels like a bloated monster. Rather, the T-Mobile G1 is well-balanced and feels solid. Were it to shave a couple millimeters off its profile, we wouldn’t protest.

The camera shutter and volume buttons are perfectly placed and work best for left-handers or right-handers that use the G1 in their left hand. When held in portrait orientation in the left hand, the G1’s volume controls are easily within reach of the left-thumb. For taking pictures in landscape orientation, the camera shutter button is perfectly placed for your right index finger.

A USB port dominates the lower-edge of the G1 and allows for easy charging and data transfers. The microSD card slot is a little harder to get at – you’ll have to flip open the display to get at the card slot.

The “chin.” That little slightly-bent portion of the G1 that houses the trackball and navigation buttons is a polarizing design element to say the least. Some will say that it kills the G1’s smooth lines. Others will praise the jutting “chin” for its ergonomic value and unique aesthetic. You’ll just have to make up your own mind… 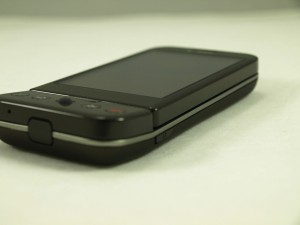 After all, this is a mobile phone made for making phone calls.

Call quality is superb. You won’t have any problems with your listener not being able to understand your muffled or garbled speech. Calls come through nice and clear on the T-Mobile G1, making for a good “phone call experience.”

The phone, or “Dialer,” application is accessed via the “Call” button, the homescreen, or the applications menu. Whichever method you choose to fire up the phone dialer app, you’ll be off and calling in under four button clicks.

And, remember, all your contacts are automatically synchronized to the G1’s address book. No hassle, no fuss.

The most amusing way you have ever seen a Mobile damaged

Ok so this is just a little bit of fun – I am NOT suggesting you go out there and...