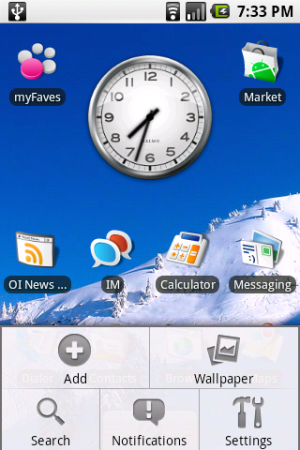 Android OS is still new, and it shows. The Android OS is continuously being patched and updated by Google. At time of this writing, there have been no less than 3 updates to the Android OS. All updates are incremental build-updates that fixes bugs and seals up security holes, so they’re not unwelcome, but they indicate the Android OS’s still-green feel.

Android OS offers an intuitive interface and makes use of eye-catching effects and icons. The UI doesn’t measure up to the iPhone OS (which is arguably king of the usability-hill), but it gives the iPhone OS a good run for its money. The lack of a soft-keyboard (on-screen, virtual keyboard) is a perfect example of the Android OS’s unfinished feel.

Some will claim that Android isn’t as polished or refined as it could be, but those pundits are just comparing the Android OS to its touchscreen competition. On its own, Android is a great platform that has huge potential. Unhindered by the kind of “walled garden” approach that Apple uses to control the user experience, Android offers developers and consumer the flexibility to do with their Android device as they see fit (within reason). Sure, Android OS is missing features like the soft-keyboard, but that will be fixed in time – and then Android will truly shine. 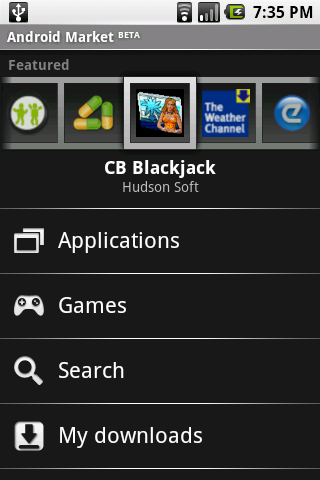 You Gmail account is the key that opens the doors to the Android Market. A quick peep at the G1/Android gallery at the bottom of this post will show that the Android Market is quite reminescent of the Apple iPhone AppStore. In the Android Market you’ll find all manner of applications that will add functionality and “fun” to your G1 – and best of all, they’re all FREE (for now).

Overall, the T-Mobile G1 is an impressive first-run device. There are issues with the backlight, the missing soft-keyboard, and weak battery. But, what device doesn’t have its downfalls? Battery life isn’t the best, but a full day of heavy use is about the same uptime that we get with your iPhone 3G. The backlight isn’t that strong, but it’s definitely helpful in some situations. And, the 3G connection does falter when indoors, but the EDGE data connection and WiFi radio ensure that you’ll have more than enough bandwidth for your needs.

In the end, it’s a testament to the G1’s prowess that we ding the handset for weak keyboard backlights and a missing on-screen keyboard.

The most amusing way you have ever seen a Mobile damaged

Ok so this is just a little bit of fun – I am NOT suggesting you go out there and...