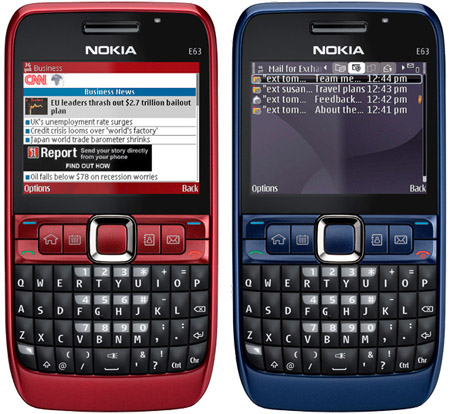 Today Nokia officially unveiled the E63 smartphone, the one we’ve already seen in the wild for few times. Touted as the mass market messaging device, the E63 resembles the Finnish giant’s E71 model, which I’m currently testing. However, unlike the E71, the newly announced device lacks GPS, has 2 megapixel camera as opposed to E71’s 3.2 megapixels, and is more plasticy, but has somewhat improved keyboard — “CTRL and “CHR” now have separate keys and so do “@” and “/”. As for the size, the E63 is slightly thicker than the E71: it measures 113x59x13 mm/126g as opposed to the E71’s 114x57x10 mm/127g. The extra thickness was properly used and the new device has a “more regular” 3.5mm audio jack (the E71 has a 2.5mm jack).

Rest of the specs seem unchanged, and include a QVGA screen (320×240 pixels), Symbian S60, WiFi, Bluetooth, 2.4-inch screen, FM radio — even though we’re still waiting to see the E63 hitting the Forum Nokia website, when we’ll know this for sure.

Also worth noting is that with each E63 purchase, users get a free gig of online file storage at Files on Ovi.

The device will be available in ruby red or ultramarine blue for 199 EUR, before taxes and subsidies.

UPDATE: The Nokia E63 will be available in three versions, with one sporting proper 3G frequencies for AT&T (E63-2):

The world has been waiting on pins and needles for BlackBerry maker RIM to launch their BlackBerry 9530 Storm smartphone....