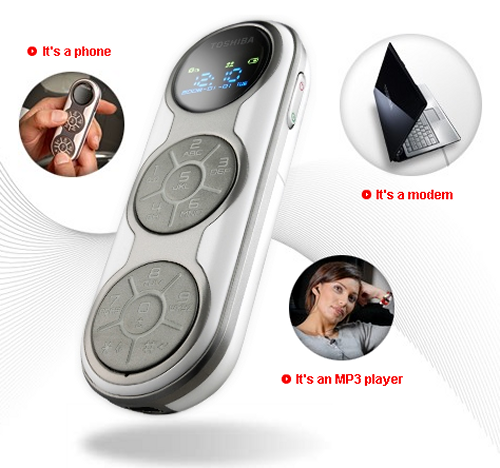 Recently I was lucky enough to get my hands on the Toshiba G450 – a diminutive little device that is multi-functional – which is a bit of an understatement!

The G450 works as a USB memory stick, an mp3 player, a mobile broadband modem, and a phone! Of these, might I suggest that the primary uses would be the modem, followed by the phone (as a backup). Not that the mp3 player is bad per se, just that virtually everyone has one already.

So, how does it all work? Well, unboxing is quick process, where you need to insert the battery, and then add an appropriate SIM (which by the way should have unlimited 3G access associated with it, or at least a high-ish monthly allowance). After charging for a while, you are ready to go!

The G450 is larger than your average modem-only USB dongle, as there is a dual rotary-layout keypad on one side – plus a screen. The two-line display could have been a disaster, but Toshiba has made good use of the available screen estate, and once you work out the power switch/rocker and volume rocker are the navigation keys, things are really quite simple.

I set up the device as a modem first of all, because that’s the primary use I would have for this product. Unfortunately I ran in to some errors whilst installing the software, which is a shame – but I should mention that I believe these to be related to my PC, because on trying a second PC, things went without issue. At this point I should also note the installation files are drawn from on-board the device, meaning CDs etc are not needed – a nice touch.

When I got the modem up and running, I connected to O2’s network, at a very respectable 2.7Mbps. I browsed the InterWeb, and did a VPN dial-up, all of which the G450 handled admirably. The status monitor SW on the PC reported back and allowed a manual disconnect, which is exactly the kind of minimal interference I would want from any management software. The G450 PC software also runs in the system tray as a process (on Windows PCs) which is kind of useful given you might be using the dongle extensively.

As for the phone capability, it’s pretty decent – I checked out some texting (manageable, although they key layout hurt my head!), and also did a couple of calls. As a backup phone, this device is superb, due to it’s small size and good battery life. Oh, and on the note of battery life, the G450 charges each time it is connected to the PC – another excellent design cue.

Overall then, this device is excellent – I was impressed that it serves the main function I would want, along with providing a backup in case my phone fails for whatever reason. I didn’t really use the memory function of the device, since apparently it doesn’t have too much capacity (160Mb) – and mp3 player was redundant for me since I having Apple providing my on-the-move music! By the way, formats handled for the music player actually extend to MP3, AAC, AAC+, and eAAC+.

For those of you out there not wanting to go for an operator specific dongle, and wanting something well-engineered, I’d recommend this device – it’s out in the UK for about £140, which I think is very reasonable considering it’s multiple functionalities.

Check out Toshiba’s webpage on the G450 here.

Thanks very much to Sharon at Toshiba for the loan of the G450!

Alltel will be adding another (we talked about LG Swift yesterday) low-to-mid range clamshell device to its offering in the...