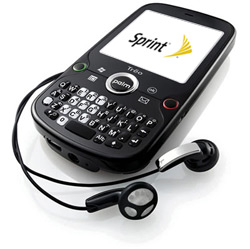 Treo-heads, don’t get too excited about this one as I’d prefer to file it under ‘rumor’ at this point… However that being said there’s a pretty darn good chance that it’ll happen 🙂

Rumor has it that a CDMA version of the Palm Treo Pro is on its way to big yellow, a.k.a. Sprint. The latest has the Treo Pro arriving on Sprint’s doorstep in Q1 of 2009. So look for it sometime in January, to be exact… January 11th. (looks like January is shaping up to be quite a big month as per usual!).

If the rumors are true and Sprint is indeed hopping on the Treo Pro bandwagon, look for Verizon to respond in-kind with their own Treo Pro at big red.

One thing you can’t deny… The Treo Pro stands head and shoulders above the best devices of Palm’s shaky past few years… So this is great news for Sprint customers. It’s always great to have new options when considering that new device!

The Palm Treo Pro, being Palm's flagship handset, is the best Palm Treo to ever come out of Palm's R&D...