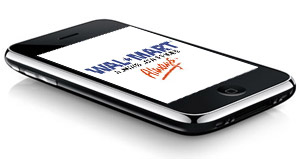 Bargain hunters and penny-pinchers with an iPhone 3G on their holiday “wish list” will be happy to hear that discount retail giant Wal-Mart and its subsidiary Sam’s Club will soon be offering the iconic Apple handset. Following on speculation hinting at just such a move, Wal-Mart and Sam’s Club have been confirmed to be picking up the iPhone 3G within days of Christmas’s passing – more specifically, on December 28. Wal-Mart already has an iPhone-optimized website, why not carry the iPhone 3G itself?

We are pleased to announce that Wal-Mart has reached agreement with Apple to offer iPhone 3G in Wal-Mart and Wal-Mart-managed Sam’s Club* Connection Centers nationwide beginning December 28, 2008.  AT&T will support Wal-Mart and Sam’s Club with the activation process for iPhone 3G, and we need all National Retail employees engaged to ensure a successful launch.

The iPhone 3G will only be sold with a two-year contract, so don’t get your hopes up for an unlocked or contract-free iPhone 3G. Pricing information isn’t yet available, but given Wal-Mart’s penchant for “rolling back prices” like we saw with the T-Mobile G1, we could see Wal-Mart hocking iPhone 3G’s at a lower-than-retail price-point.

Those with a mind for saving as much as possible on high-end purchases may have won’t be seeing an iPhone 3G stuffed in their stocking in time for Christmas, but what’s a couple days when cash-savings are at stake?

The iPhone 3G will be made available at 2,500 Wal-Mart locations, with an additional 69 Sam’s Club stores joining the fray. Select Wal-Mart locations will even feature live, in-store demonstration units, just like Best Buy Mobile stores.

Want to learn something new? Have an iPhone/iPod Touch? You'll love Howcast's newly unveiled app. It's free and it features...