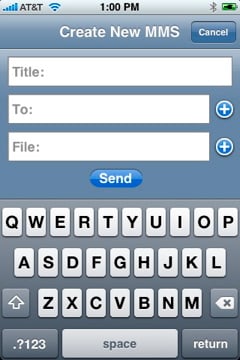 Now, before you get all worked up in an MMS-frenzy, you should know that MMS is coming to iPhone 3G’s on Telia’s network. MacWorld has confirmed that the Scandinavian wireless carrier has the distinction of offering the iPhone 3G exclusively in Apple rival Nokia’s home-turf, and it looks like Telia is turning up the heat on Espoo.

The iPhone and iPhone 3G have been famously flamed for its lack of features like cut-and-paste capability, Flash support, and MMS (also known as video- or picture-messaging). There are jailbreak workarounds that allow you to “hack” together a semi-working MMS solution on the iPhone and iPhone 3G, but fully-functional MMS still eludes iPhone users. So, to appease its subscribers,Telia is looking to address the iPhone’s lack of MMS with a homegrown iPhone application that’s due to hit market in a couple months.

It’s not clear how the Telia-developed iPhone application will enable MMS functionality, but it’s entirely possible that the application will be made available outside of Telia’s market. For the sake of MMS-loving iPhone users around the world, let’s hope that the MMS app spreads like wildfire.

Google's native iPhone application used to be known as something of a redundant app. You could just as easily open...