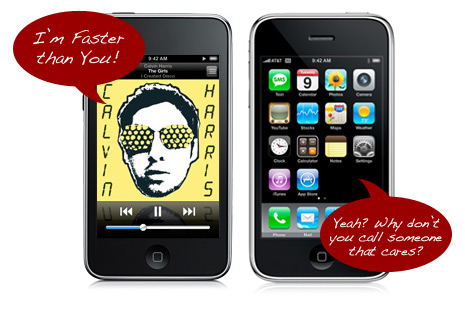 If you’re looking for better speed and performance out of your iPhone… You might actually want to try an iPod Touch! The most recent revamp gave the 2G iPod Touch a boost in processing speed, up to 532MHz compared to 412MHz in the iPhone 3G.

While the iPod Touch doesn’t have phone capabilities (of course), if you’re looking for a device to handle all of your music, videos and games, the Touch would be your device of choice. So next time you see someone playing around with their iPod Touch… don’t say to them ‘Yeah, but does it have a phone!?’. Chances are they don’t need the phone… and it’s faster than your iPhone 3G anyway 🙂

Note: I’d really like to test this out to see if there is a noticeable difference in performance. I was playing ‘Ace Tennis’ the other day, and there were tons of lags… I’m sure the lags were due to connectivity issues (was playing a game over the ‘net) but nonetheless, would like to put the two devices side-by-side for some speed tests. Anyone want to send me their 2G iPod Touch?

Meizu’s revamps its website in preparation for the M8 launch?

The company behind the world's most known iPhone clone seems to gear towards the launch of their M8 handset. The...