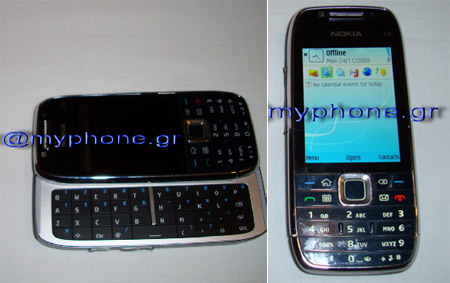 Nokia seems to be gearing toward the E75 launch, as we have more photos of the device caught in the wild. The both numeric keypad and slide-out QWERTY keyboard equipped Symbian S60 smartphone looks more real than ever and we’re hoping the Finnish giant will pull the “launch trigger” in the coming days or weeks.

Specs wise, there’s a 2.4-inch QVGA screen and we guess Wi-Fi connectivity, 3G (HSDPA) and aGPS. In addition, it seems this baby will run the S60 3rd edition Feature Pack 2, rather than FP1 which is used in the E71 model. We’ve no details on battery life, but we’re certainly keeping our fingers crossed they will use the same kind of battery that is used in the mentioned E71. Finally, we’re also clueless when it comes to camera. My bet is 3.2 megapixels, though I’m hoping for more…

Nokia, it’s about time to launch the damn thing. C’mon folks get on with it. 🙂

In the age of individuals, everyone wants to differentiate itself from the crowd. Smart companies know that, hence we already...