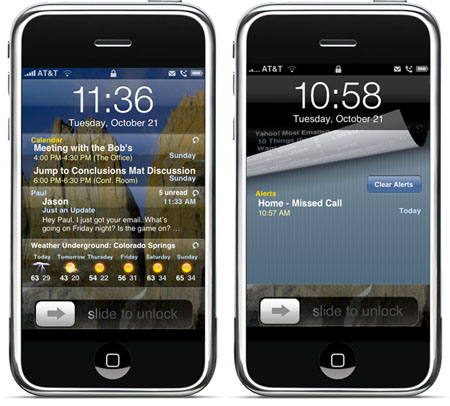 A new version of IntelliScreen has been released — latest version is 2.32. As you can guess, one of the most useful apps for the jailbroken iPhones is updated to sing along the latest iPhone firmware, 2.2. In addition, the new version of iPhone’s unofficial “Today Screen” can now work alongside popular Google Calendar syncing tool, NemusSync, which is something I’ve been waiting for some time. Known bugs were fixed and, overall, the application is more stable than ever.

It’s not free, though, and it does require a jailbroken iPhone/iPod Touch to work. But if there’s a single app worth jailbreaking for – it’s IntelliScreen. I just love the idea of having my calendar entries on the home screen, period.

Hop over to IntelliScreen’s product page to learn more about it, or download the app through Installer or Cydia. Once you get used to it, you won’t be able to live without it!

ACCESS has announced that the brand new beta version of their Garnet Virtual Machine is now available for Nokia Internet...