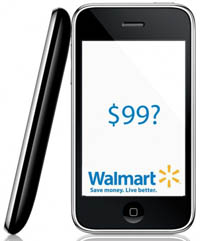 Remember the rumors about the iPhone coming to Walmart? Well, apparently those rumors are looking more and more true… Especially with the latest news now that the store will stock a version of the iPhone slated to sell for only $99 on a 2-year contract.

The new ‘Walmart’ version of the phone can be sold for less because it is a 4GB model. No word on other features of the device, however one would have to expect it comes with the same specs as the 8GB and 16GB versions. A 4GB should fit in nicely for most consumers… In fact, I think a 4GB iPhone selling on the cheap at Walmart is almost ideal.

If the rumors are true, expect US Walmart stores to kick things off… With Canadian stores following suit as soon as they can get onside with Rogers Wireless.

Tooling around town up here in Winnipeg, I have to admit I do not see many iPhones at all. Mostly BlackBerry devices up here. However, if the iPhone does start to make its way into Walmart stores… I can’t help but think I’ll be seeing the touchscreen device more and more.

In a economy officially drowning in recession, this news comes as no surprise. AT&T Inc. has joined the recent tidal-wave...