Well, by the looks of a recently published presentation from Nokia’s Capital Markets Day, Nokia is making a serious push into crafting an intuitive touch-only UI for its Symbian S60 mobile platform. The new touchscreen UI could make good on the promise of an intuitive S60 Touch UI that the Nokia XpressMusic 5800 failed to deliver upon.

A slide from the presentation shows a Nokia touchscreen handset mockup bearing a sleek and intuitively designed touch-only UI. Two things about the slide strike us as significant. 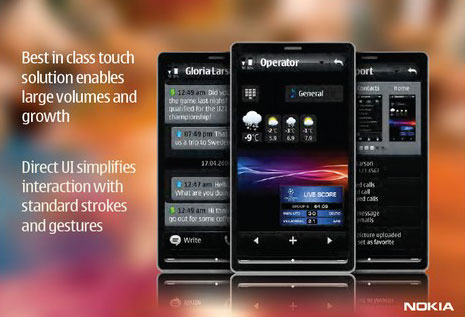 First, the mockup handsets depicted in the slide shows a minimalistic design with few buttons. The slide indicates that Nokia is putting some thought into designing a touchscreen handset that relies heavily on touch-only inputs, with little need for physical buttons. Second, the user interface seen in the slide suggests that Nokia’s work in touch-optimized UI’s has borne a modern-day interface with an intuitive layout and attractive design elements.

There’s no solid information coming out of Espoo in the way of touchscreen UI development. But, if this slide presentation is any indication of what’s brewing in Nokia’s R&D labs, Nokia has a touch-optimized UI in the works that will give Apple and its iPhone OS a serious run for its money.

A Nokia touchscreen handset with a sleek UI that actually makes it a pleasure to use the aging, yet flexible, Symbian S60 platform? Yes, please!

Those of you chomping at the bit to own Sony Ericsson's newest flagship smartphone, the Sony Ericsson XPERIA X1, will...