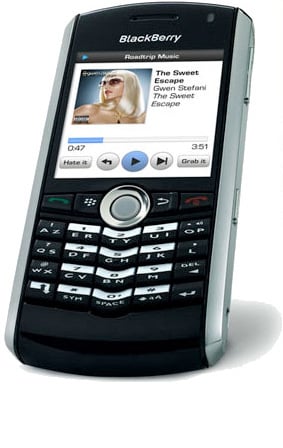 The promise of a streaming, wireless music discovery service on BlackBerry sounds nearly too good to be true. The platform isn’t exactly renown for its multimedia flashiness (although it’s no slouch), so when nuTsie released its BlackBerry application about a year ago, I was extremely intrigued. This was something I would expect from Windows Mobile, or even on the iPhone if Apple ever felt like expanding iTunes, expecially considering nuTsie worked so closely with iTunes to bring your playlists to your phone as well as play nuTsie picks in your iTunes.

The social element is really what caught my eye about nuTsie – a simple slider determined how much of your music was generated as suggestions, a Grab It button let you easily save new stuff for later, a wide variety of Top 100 lists helped you get your groove on in any genre right off the bat, and playlist sharing allowed you to see what your friends were listening to. Overall an impressive web service, but I really wanted to see how it translated to mobile.

Check out our full-on review of nuTsie for BlackBerry after the jump!

nuTsie for BlackBerry
By Melodeo (Free)

Features
Your music in more places: nuTsie placeshifts your music to any web-connected PC and many mobile phones including Blackberry devices.

Mix more songs into your music: Serendipity Slider – Start with your music. Add the desired amount of recommended music. If you like what you hear, use the grab it button and add more music to your nuTsie collection.

Pick from more playlists: nuTsie has gobs of member and featured playlists like New Hip Hop, iTunes’ Best of 2007, 100 Greatest Dance Songs of The 90’s, and Sasquatch! 2008 Playlist.

Share with more people: Unlike iTunes, nuTsie doesn’t restrict your sharing to people on your local network (as if you like any of their music anyway). Share playlists with friends across the entire internet and even on mobile phones.

Verdict
nuTsie for BlackBerry is a great way for discovering new music and quickly switching moods while on the move, but don’t expect it to replace a locally-stored music library. The iTunes syncing isn’t all it’s cracked up to be and music quality can be spotty, but it’s still worth your while to get some new music into the shuffle.

Google Maps for Symbian S60 and Windows Mobile gets Street View, too!

Good news for Symbian S60 and Windows Mobile smartphone owners. The version of Google Maps for mobile with Street View...