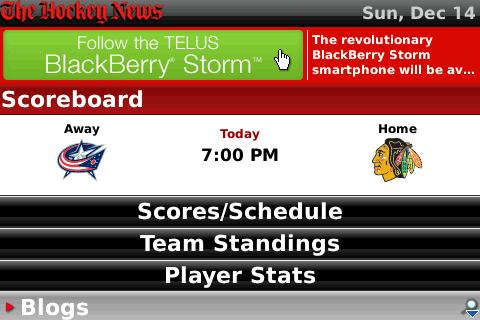 I admit it. I’m a hockey fan. I play hockey… Goalie in fact. It hurts. Honest. I’m Canadian… Could you guess?

That said, I’m sure you wouldn’t be surprised to hear that my ears perked up when I heard The Hockey News updated their mobile application for the BlackBerry. The app which was released back in September, has already been downloaded over 18,000 times. Not bad.. (but not that great now that I think about it!? There’s a lot of Berry-toting Canadians!).

The update to The Hockey News Mobile app adds the following features to an already solid offering:

If you want to install The Hockey News Mobile on your BlackBerry, all you need to do is hit up http://thn.mobi from your BlackBerry browser. And yes…it’s FREE.

Samsung recently announced their new BizBee branding for enterprise smartphones, and it looks like they mean business after bringing on...