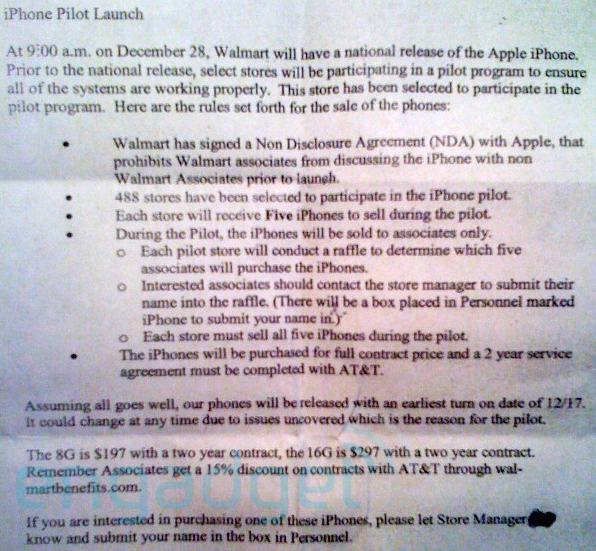 Remember the rumors from earlier in the month that had WalMart selling the iPhone 3G for as low as $99? New details in the form of an official letter (above) have emerged and the low-down is a tad different.

The iPhone 3G will be available on December 28th at WalMart. The pricing is not as low as originally expected however. What happened to ‘watch out for falling prices!?’ 😛 Looks like the 8GB model will come in at $197, while the 16GB model will hit $297. Both devices require the usual 2-year contract on AT&T.

I can’t fathom to imagine the frustration and backlash from the iPhone community as a whole if WalMart started selling the device at $99. I think Apple would have a tough battle on their hands fighting consumers that would want a rebate or some sort of compensation… However I suppose that wouldn’t be the first time consumers get the rough end of the stick when it comes to buying devices early (although, in this case I wouldn’t consider iPhone users ‘early adopters’… you know what I’m getting at here!)

If you thought WalMart stores weren’t busy enough this holiday season… You might want to check one out on the 28th for shoulder to shoulder iPhone fans clammoring to get their hands on the device.