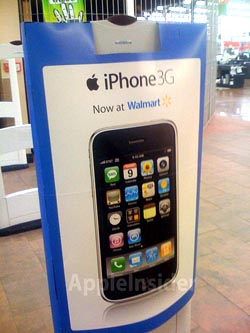 Slightly ahead of schedule, it looks like some WalMart stores around the US have begun placing advertisements in-store touting the iPhone 3G. They no doubt want to get the word out as much as possible… I’m going to start my stopwatch to see how long it takes for that first TV spot to air for WalMart featuring the iPhone 3G.

Everything as far as I know is still on schedule for WalMart, with stores to start selling the device at 9 AM on Sunday, December 28th. The 8GB model will be available for $197, while the 16GB will fetch a $297 price tag. Purchasers will of course be required to sign-on to the obligatory 2-year AT&T contract.

With the release of the iPhone 3G smack in the middle of the month-end shopping frenzy, I’d look for the device to fly off the shelves. No details have been leaked regarding the number of units to be in-stock at each WalMart store, but I would suspect supplies are going to be limited.

French telecom regulations threatened to keep the iPhone 3G out of France last year, and it looks like French telecom...