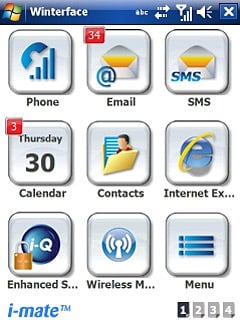 If HTC (TouchFLO 3D), Sony Ericsson (Xperia Panels), Samsung (TouchWiz) and Asus (Glide) can have their own customized UI apps that sit on top of Windows Mobile, so can i-mate. The idea is of course to make smartphones running Microsoft’s mobile OS easier to use for an average user.

That being said, recently we’ve spotted i-mate releasing an UI app for its line of Windows Mobile smartphones called i-mate Go, which is based on the VITO Winterface and which honestly reminds us on iPhone’s UI. It features large, colorful icons and is easy to personalize (you can check our previous post about Winterface from here).

The new UI will be shipping with new devices, and in the meantime owners of Ultimate 9502, Ultimate 8502, Ultimate 8150, Ultimate 6150 and JAMA 101 models are advised to grab it and make their devices easier to use. Here’s a link to the page on i-mate’s website from where they can grab i-mate Go.