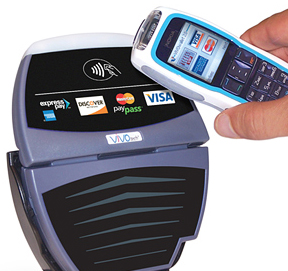 The GSM Association has recently settled on a common format (single wire protocol) for near-field communications, opening the gates for many manufacturers to start incorporating NFC chips into their mobiles as early as the second half of 2009. Credit cards are already testing the waters for wireless transactions, but cell phones have yet to make the big leap (although a few are starting to). Technology aside, there’s going to be a lot of hesitancy among end-users to empower their phone to buy stuff simply by waving it like a magic money-wand, as that could quickly pose a security risk if lost, and that psychological barrier will stick even if safeguards are in place. While they’re optimistic for the progress being made, IMS Research is ballparking 2011 as when NFC will really start to take off.

“The natural design cycle of handsets means that launching NFC on any meaningful scale will take up to nine months at best; but there will be a further period of time as new handsets and the supporting infrastructure filter into the market place”, said John Devlin, Research Director at IMS. “Whilst this is manageable and can be planned for, what is more unpredictable is the time required to turn well intentioned partnerships into workable relationships.”

It used to be that the industry was thinking it's the Near Field Communication (NFC) that is the leading contender...