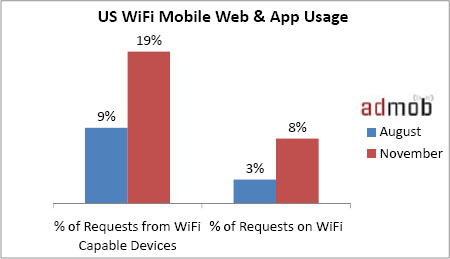 AdMob is out with their November 2008 Mobile Metrics Report. From there we find out iPhone requests grew again, this time for 52% month to month, reaching a total of 359 million. This in turn gave iPhone 6.3% of total requests or 9.9% of U.S.-based requests.

with 42% of all requests coming in over WiFi instead of a mobile operator network, the iPhone has by far the most WiFi usage. WiFi only devices such as the iPod Touch and Sony PlayStation Portable also generated significant traffic, and the similar is expected to happen with WiFi-enabled devices like the T-Mobile G1 and BlackBerry Bold.

Other highlights from the November 2008 report:

Want all the details? Hop over to AdMob’s website to grab the full report. As usual, it’s free!

Wireline Service Going Extinct in US – Mobile Phone Use Up

It seems every now and again, a research firm releases statistics that confirm the slow death of wireline (landline) telephone...