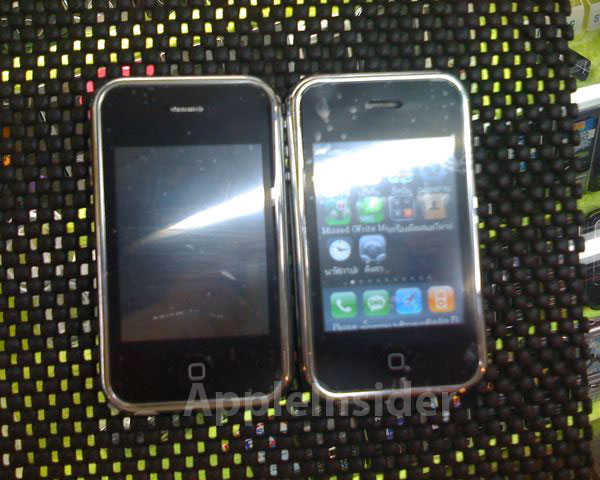 Coming as no surprise to me whatsoever, some new ‘iPhone Nano‘ knockoffs have been spotted. They were found in Thailand, and as you can clearly see, the devices are built to a smaller form-factor than the current iPhone 3G (hence the ‘nano’). The fakes even have the Apple logo on the back cover plate to make them look as official as possible.

No doubt we’re going to see more and more of this in the run-up to Macworld in January. The iPhone Nano rumor mill seems to be taking the cake at the moment, at least when it comes to hot rumors for the upcoming conference and expo.

The iPhone Nano rumors all started thanks to images of an XSKN case that was designed specifically for such a device. As I reported earlier:

In September the company (XSKN) released case images of the unreleased 4th Gen iPod Nano, and while there was much question of the validity of the images… they turned out to be spot on.

You can bet it is in their best interest to glean upcoming product info from Apple in any way they can… They can begin working on cases right away, and get a jump on production well before the competition.

As always file this under rumors for now… But as time goes on the probability of such a device is most certainly going to become more and more likely.

More images available after the jump >

Wired have published their annual Top Technology Breakthroughs of 2008. The top 10 list includes items that are innovative, groundbreaking......