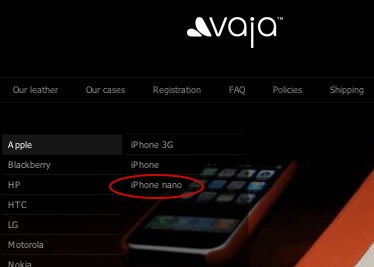 If you weren’t sure if the whole iPhone Nano rumor was going to be a reality or not, it looks like reality it will be… At least according to this little bit of information.

Vaja Cases are a long time case/bag/accessory manufacturer that build top-quality product. This morning it was noticed by the peeps at BGR that they’ve added an ‘iPhone Nano’ section to their website. Now, not only has XSKN in China added the iPhone Nano… Now the folks from Vaja have done the same, and I’m even more inclined to believe that this thing is going to happen. I should note here however, that I just tried hitting up vajacases.com over here, and could not find the iPhone Nano on the site. Could be I’m seeing a cached version of the site, or they’ve removed the entry for now. Puzzling. To check for yourself look under the Products menu, then hit up Phones > Apple… and let me know what you see!

iPhone Alley is also reporting that the iPhone Nano will be appearing at Macworld, and that this has been confirmed. They had a ‘reliable source within Apple’ tip them off that they are indeed working on the iPhone Nano… and that the official announcement will take place at Macworld. The device will be similar in form to the iPod Touch, but will not include 3G.

All very interesting stuff if you ask me. I’m really curious to see what this iPhone Nano turns out to be, if all of this hype is indeed true.

Mirror app turns your iPhone/iPod Touch into a… mirror!

Juice Wireless has released a new iPhone app called Mirror. It's a simple app that "transform your iPhone screen into...