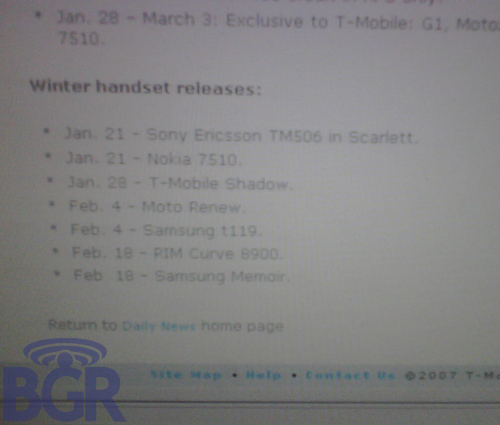 More news regarding the wickedly awesome BlackBerry 8900. Seems as though a snapshot taken of a T-Mobile roadmap seems to confirm what Simon reported way back on Christmas Day!

Word has it that the next generation BlackBerry Curve recently landed on Rogers will also make its way to the U.S. via T-Mobile for February 18th. 2009.

Correctorino Simon. At least that is, if this roadmap is accurate (have no reason to believe otherwise!). The BlackBerry Curve 8900 is probably the nicest Berry I’ve tried/used to date. Better than the Bold… Better than the Storm. It’s simple, fits in the hand nicely, and heck… it just feels right. It features a nice 480×360 display, WiFi, GPS, and a 3.2MP camera. For anyone looking for a nicely buttoned-up package in a new device, hold off till the BlackBerry 8900 drops on T-Mobile.

I’d be remiss if I did not mention the other devices noted in the T-Mobile roadmap:

That’s a nice selection of devices coming to T-Mobile in the new year!

Sales of Nokia handsets bearing images of of Russia's Stalin have stirred up controversy in the Nokia camp. Granted, the...