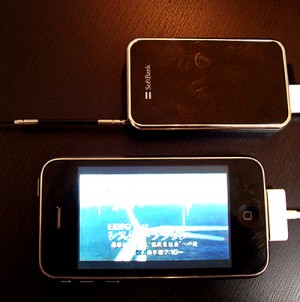 The Softbank One-Seg TV tuner was recently released to the TV-consumer public. That is, as long as you’re a Softbank subscriber. We’re not going to see this particular iPhone 3G accessory make the jump to

Thankfully, the lucky folks over at DVICE were good enough to post hands-on pictures and first impressions of the 1-Seg TV tuner. The device is sleekly styled (like the iPhone 3G itself), lightweight, and streams crystal clear TV to the iPhone 3G. Unfortunately, there’s the issue of power drain. Even with the integrated battery pack, you’re only going to get about an hour’s worth of TV viewing before your iPhone 3G starts complaining about low battery charge.

If you’re planning on moving to Japan anytime soon, the 1-Seg TV tuner might be a worthy investment. otherwise, you can just keep dreaming about getting terrestrial TV on your iPhone 3G.

Check out the rest of the pictures over at DVICE.