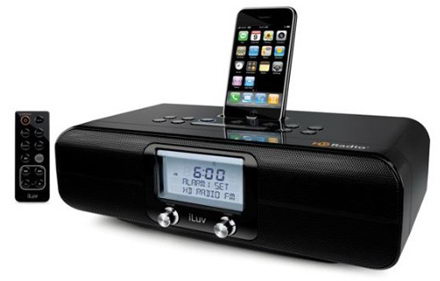 iLuv has recently unveiled a new HD radio appliance that can sing along Apple iPhone and iPhone 3G. The iHD171 HD radio is one of those devices designed for true Mac fans who will have it near their bed, always set to woke them up in the morning. Scrap that, there’s an option to set two alarms so that couples could use iLuv’s radio without fighting over wake-up time.

Aside from boasting an iPod/iPhone dock and (obviously) an HD radio signal receiver, the device also sports a front-panel display that shows such information as station, song title, band and frequency; an auxiliary line input (3.5-millimeter jack); audio out; and twin 4-watt drivers. jAura speaker technology is used and the iHD171 also adds iTunes tagging support to the mix…

Here's an interesting accessory for anyone who's not satisfied with his/her mobile phone's camera. Thanks to the magnetic mount lenses,...