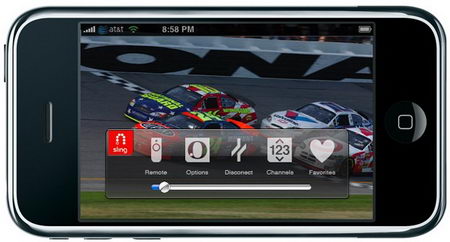 Wow this really took some time. Back in June, we talked about SlingMedia’s plans to bring its popular SlingPlayer Mobile to the iPhone platform and now it’s happening. The app is still not here, but the company plans to send it for the AppStore review during this quarter. What that exactly means in terms of the release date is not known, but I guess we’ll have more answers by the March of this year.

In the meantime, Mac owners may also like to know that Sling has also unveiled a prototype SlingPlayer for Mac HD, which should enable users to stream their high-def material to their shiny computers… Full release follows after the jump.

“SlingPlayer Mobile is ideally suited for the iPhone’s large touch screen display and I know iPhone users are eagerly anticipating the application’s availability,” said Blake Krikorian, co-founder and CEO of Sling Media. “Add to that HD streaming support for Slingbox PRO-HD customers and live TV support on our video entertainment site, Sling.com, and you can see Sling Media is committed to delivering great solutions for Mac users.”

SlingPlayer Mobile gives consumers their entire home TV experience, including local channels, local sports teams, video on demand, pay per view, etc. Any program that you can watch on your sofa back home, you can now watch via your iPhone using a standard network connection (3G Cellular, WiFi). In addition, SlingPlayer Mobile for iPhone users can also control their home digital video recorder (DVR) to watch recorded shows, pause, rewind, and fast forward live TV, or even queue new recordings while on the road.

SlingPlayer Mobile for iPhone will be submitted to Apple for testing and approval in Q1. The price has not been determined at this time. SlingPlayer for Mac HD will be available for free via the web-based SlingPlayer within Sling.com later in Q1. Mac customers will be able to use either Safari or Firefox web browsers to get both HD streaming and Live TV within Sling.com.

After seeing Quickoffice releasing the free iPhone app - MobileFiles, guess we expected them to follow with a pro version....