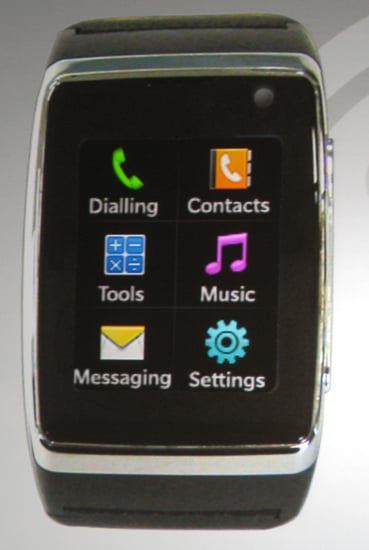 Like we mentioned last night, LG has announced their 3G HSDPA, video conferencing watch phone today, model number LG-GD910, which is due for Europe this year. Just about as stylish as the Prada Link, isn’t it? The CEO was a little tenative to show off the features, since it’s still in prototype stages, as you might be able to tell from the fuzzy release date, but they’re saying it will have voice calling, text to speech, and stereo Bluetooth capabilities. As far as construction goes, it’s water resistant, 85 g, has three mechanical keys, and 61 x 39 x 13.9 mm.

While that was the big thing out of the LG press conference, they also talked about noise cancellation technology using dual microphones, as well as harping on the success of the Incite, Dare, Decoy, and Lotus. Green technology and expanding their mobile TV features were also on the agenda. Here are a few snaps from the event, including a live picture of the spiffy new watch phone.

Motorola is out with three new completely different handsets. Let's quickly go through each one of the devices announced: First...