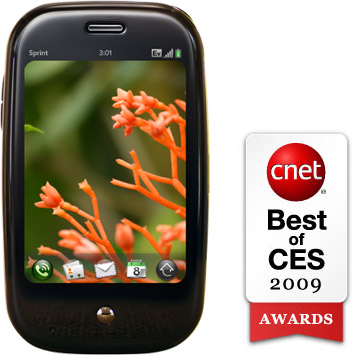 There’s no doubt, the Palm Pre smartphone was the star of this year’s CES. Hence, we are not surprised CNET honored Palm’s latest baby with the “Best in Show” award. At the same time, thousands of CNET’s vistors awarded the Pre with “People’s Voice” award using an online voting system on CNET’s website.

In addition to Palm’s smartphone, CNET also honored non-mobile products across other 9 categories such as Car Tech, Computers and hardware, Digital photo and video, Gaming, Televisions. You can read CNET’s official release on PRNewswire.

Alternatively, if you happen to be in New York during next week, you may want to stop for a moment at Times Square on 42nd Street, where you will be able to watch video recap of the “Best of CES” Awards which will air on the CBS Outdoor digital board. Then, on Friday, January 16, at 12:30 p.m. local in each market a special lunchtime 30-minute webcast will air on all of the websites of the CBS Television and select CBS Radio Stations. The recap from the show will also air on CBS Television Stations the weekend of January 17th and 18th. Finally, CBS Outernet’s out-of-home video networks and partners will run recaps of the award ceremony.

Palm's 2009 CES Keynote from DevilsRejection on Vimeo. So, you've heard all about the Palm Pre and the brand-spanking new...