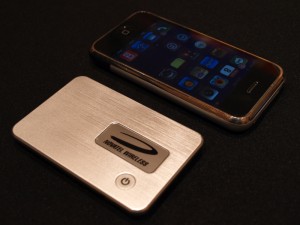 CES is always good for putting eyes and hands on new products, regardless of how little mobile-related material there happens to be in any given year (ahem, 2009). One of the highlights of this year’s CES was Novatel’s showcase during the ShowStoppers press event at the Wynn Las Vegas. The highlight of this year’s Novatel presence at the show was their upcoming Novatel MiFi Portable Hotspot.

If the name doesn’t give it away, the MiFi is basically a wireless router with an integrated 3G cellular modem. The kicker is that the Novatel MiFi is about the size of a credit card (and almost as thin) and runs on its own Li-ion power supply. The MiFi is supposed to be good for 5 hours, but we’d imagine that the battery life would suffer a bit with five people connected to the MiFi (the maximum allowed) at the same time.

With both GSM and CDMA frequency support, the MiFi portable hotspot can pull down high-speed wireless 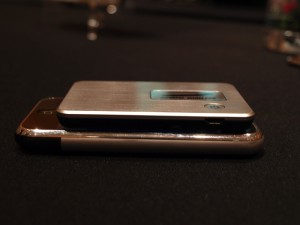 data on both HSDPA and EVDO Rev. A networks. When on a GSM network, all you need to do is pop in your GSM SIM card and away you go. It’s little more complicated for CDMA networks in the US, but no doubt worth the extra steps.

The Novatel MiFi ups the ante even further with its “intelligent” operating system. Based on a Linux kernel, the MiFi runs a low-level OS that handles the download and execution of location-based applications. That’s right, the MiFi sports an operating system, backed by 2GB of storage (for the CDMA variant, the GSM version will also have a microSD card slot for expandable storage), that is capable of downloading and running applications designed for the MiFi. Simply connect the MiFi to your computer, via USB, and log into the MiFi’s URL. From there, you can download applications directly to the MiFi – things like GPS applications, proximity-based social networks, etc. And, since the applications live natively on the MiFi, any computer connected to the MiFi can run the location-based apps without having to download the application to the computer. If that doesn’t make you want to buy a MiFi, we’re not sure what will.

The Novatel MiFi will be available through select carriers in the US in the first half of 2009 (1H 2009). Pricing will depend on carrier subsidies, but we’re expecting to see the MiFi coming in around $75 to $150 on contract.