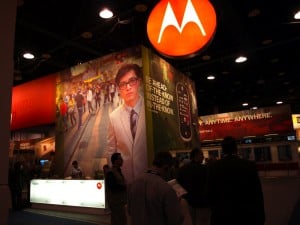 Motorola’s presence at CES 2009 Las Vegas was a given. CES is the biggest consumer electronics tradeshow in the US and there’s no way Motorola could miss out. It’s a shame we can’t say the same for Motorola’s attendance at CTIA Wireless 2009. Motorola’s booth at CES 2009 turned out to be something of a last-stand for Motorola’s 2009 convention-going year.

Nevertheless, Motorola was proudly showing off their Motorola AURA on the Las Vegas Convention Center showfloor. The high-end materials and watch-like precision build give the AURA a air of luxury and refinement that we’re pleasantly surprised to see from Motorola. More on our hands-on Motorola AURA experience here.

As for the rest of the booth, Motorola highlighted their CrystalTalk sound-enhancing technology as well as their support of 4G Mobile Broadband products. With their upcoming product lineup expected to be decreased to about a dozen phones, we can see at least half of all new Motorola handsets sporting CrystalTalk.