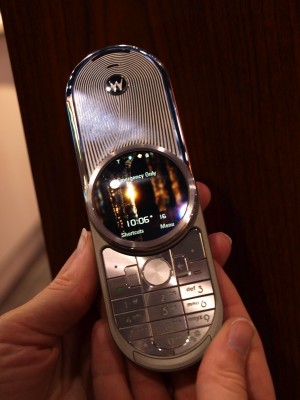 The Motorola bunch were on hand at the Las Vegas Convention Center to showcase their current mobile lineup at CES 2009 Las Vegas, but the real gem of Motorola’s show was their Motorola AURA luxury phone.

The Motorola AURA isn’t for everyone, what with its $2,000 price tag and all. But, you do get what you pay for. We’re usually quick to dismiss pricey handsets, but the Motorola AURA gets a solid thumbs-up from us. Sure, the form-factor has been done before (by Motorola, no less), but the AURA’s high-end materials and watch-like precision build give the handset a modern luxury feel.

At the heart of the AURA’s design is the gear-driven swivel-blade. The gear mechanism boosts the swivel movement, snapping open the AURA’s flip with just the slightest of touches. Nudge of the blade just a bit to the side and the 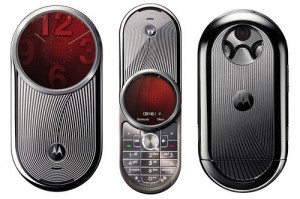 AURA swivels open with a smooth and firm action. And, for the icing on this high-end piece of cellular-cake, the gear drive is visible through a little window on the backside of the AURA – just like high-end watches with transparent casings.

Then there’s the incredibly sharp circular display that seems to pop out of the bezel. A 62-carat convex crystal lens protects the display and really drives home the Motorola AURA’s luxury watch aesthetic. We’re told that the shiny crystal sitting atop the display will fend off keys and coins without a scratch, for folks that like putting $2,000 cellphones in the same pocket as their keys.

But, what about that $2,000 price tag? The Motorola AURA might just be worth it… for some.

Samsung Mobile has been honored with 15 International CES Innovations Design and Engineering Awards. Among wireless distributors, the Korean company...