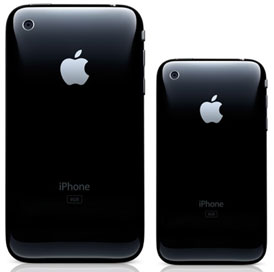 I have a feeling the iPhone Nano rumors are simply going to get more and more common as time goes on, and information leaks. Today, more news has come out that is hinting at a 4GB iPhone model to be released… such a model would no doubt be an ‘iPhone Nano’. Or would it?

The smaller, more affordable and cheaper-to-build model would help Apple out during these rough economic times. The iPhone Nano would be cheaper to build, and for the end consumer, cheaper to buy. Sounds like a pretty good win/win to me. Financial expert Maynard UM of UBS has commented that Apple is working on such a device to help boost sales.

All of that said, this 4GB model could be a full-size iPhone as well, and not the rumored iPhone Nano. Perhaps we’ll get both… one… or neither. Who really knows. All I do know is Apple is due to introduce/launch something new in their iPhone lineup, and a cheaper more affordable device sounds like it could be the ticket to increase overall sales, boost stock prices… and make shareholders happy. Isn’t that what it’s all about?

Outpost brings Basecamp to the iPhone

I'm not sure have you heard about 37signals and their popular project management tool Basecamp, which is used by more...