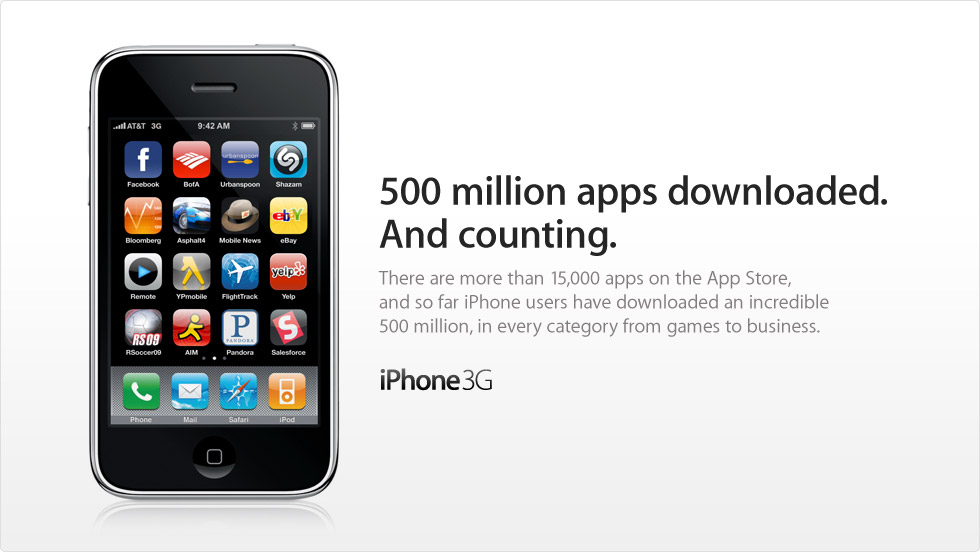 Just a quick little note here… Apple has announced that they’ve had 500 million apps downloaded via the App Store. That’s a lot of apps. 500 million x an average of $1.99 per app, divide by 3, then carry the 2… Lots of money exchanging hands here (sure, a lot of free apps too… haven’t forgot about that!).

Within the graphic above you’ll also note the tally of apps available is now above 15,000. I can’t recall any estimates on how many apps are available on other platforms… Surely Android is well behind this mark, but as new devices go to market, and more developers take on the platform, I know we’ll see more development within the Android Market. Plus with RIM and Palm set to launch their own app stores, this should provide us with a much easier way of not only downloading apps, but comparing app count, prices and more from platform to platform.

Congrats to Apple, and congrats to all of the developers out there that are pumping out new apps daily. Gotta love checking out the App Store each day to find new and exciting things to try out!

Thanks for the heads up Ryan!

Space Invaders gets a second life in AppStore

Remember Space Invaders? It was one of the first games I ever played and I still enjoy it from time...