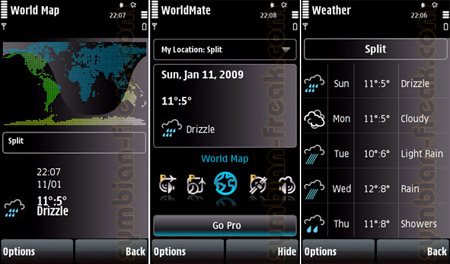 We’ve already covered MobiMate’s popular WorldMate application in the past. Now we’re glad to report that it has been optimized to work on the latest Symbian S60 5th edition devices like the Nokia 5800 XpressMusic and the upcoming Nokia N97.

As you’re probably already aware, WorldMate is an essential app for anyone who travels frequently. It provides users with such tools as world clock, currency converter, weather forecast, as well as detailed flight information (premium feature).

I haven’t tried out the WorldMate on the Nokia 5800, as I don’t have a single unit at hand. However, SymbianFreak had a chance to play with it and reported back that the new WorldMate rocks. He says it’s “by far the best looking application” that he has ever tested on his Tube. This, according to him, is due user interface improvements, which make the application even easier to use (when compared to older versions). The problem, however, is the lack of support for landscape mode, although I wouldn’t call that an issue…

And that’s about all we can say about WorldMate. If you’re travelling often and have the Nokia 5800 XpressMusic, it’s a must have. Here’s a link to WorldMate’s website from where you can download the app.

Handango has some interesting numbers to report for its 10th anniversary

Handango aka "the original app store" is celebrating its 10th anniversary, and has launched a revamped website to make it...