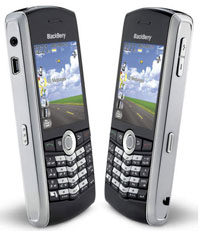 You may remember a week or so ago that I reported Fido would start carrying BlackBerry devices up in Canada. The only sad fact being, that their first device was to be the BlackBerry Pearl 8100. It looks like Fido has trained/is training their staffers, and are shooting for a launch date on February 4th.

On top of launch date news, BGR has received confirmation on the device to be offered, along with some pricing specs. Unfortunately, the device was indeed confirmed to be the BlackBerry Pearl 8100. It should become available for $400 on no contract, $350 on a 2-year, and $25 on a 3-year contract with voice and data. Wow, think they want to get you signing up for the 3-year deal or what!? 🙂

Plans that should be offered are:

Note: BES will apparently not be offered. Big poppa Rogers would rather you run BES through them.