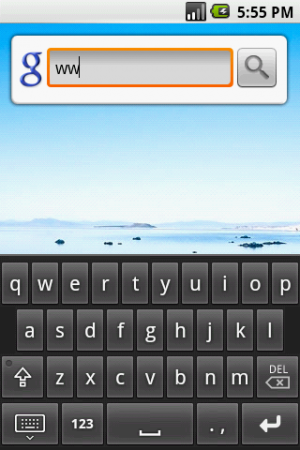 So after shoveling through T-Mobile’s thread on what the deal is with the Android Cupcake update, I finally got a straight answer.

[Cupcake] was a parallel branch that was used for further development while [the Android team] took on the task of converting a main code branch into an open source format. They merged it back when they were done with the open source transition, not because the engineers working on cupcake had produced a final solid product-worthy result. So, some “works in progress” that had been going on in a dead end parallel branch was merged into master. That doesn’t mean it is ready for release.

The short version? The Cupcake development branch is in more developer’s hands now, including a certain Arron La, but everything is entirely work-in-progress, so don’t hold your breath. However, we can get a developer’s view of things that are coming down the pipes, including:

1. New Local Setting Page – Gives you option to pick different locales and pick different text inputs.
2. New Option to view running and third party applications – An option to view running and third party applications from the normal application list. Does not provide a way to terminate them.
3. New windows opening/closing animation effect – a new popping effect when windows are opened/closed.
4. New default notepad – a very simple and ugly default notepad.
5. New Global Time application – not sure if it will be provided by T-Mobile but it’s just a rotating Earth and I couldn’t get it to do anything else.
6. New Spare Parts Application – Once again not sure if the official version will have this, but it provides a number of extra settings such as setting windows animation and transition animation speed, font size, end button behavior and etc. It also has a “display rotation” option which supposedly should allow auto-rotate base on orientation across the entire os, but it is not currently working.
7. New Virtual Keyboard (as seen on video -ed.)– The virtual keyboard will pop up on every edit box. I didn’t feel any haptic feedback but I am thinking that it’s just not there on the example keyboard. Because the phone does not auto-rotate (an option exists but it doesn’t work), it’s very hard to type on it. The sample keyboard also does not provide auto-corrections.
8. Slightly better looking buttons with more shadow.

Looks like quite the upgrade, just remember that it’s all running pretty poorly right now. It’ll be awhile before these changes see the light of day.

Well that certainly didn't take too long, now did it? Just weeks after Palm's highly-anticipated Palm Pre and Web OS...