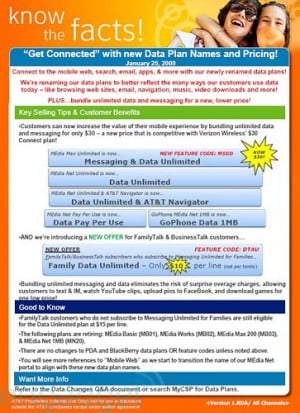 AT&T customers with wireless data plans are no doubt familiar with the No. 2 US carrier’s insistence on branding their data offerings as part of the MEdiaNet family of services. Why AT&T has stuck by their MEdiaNet branding for so long is beyond us, but it looks like Big Blue has finally seen the light. An allegedly leaked internal document indicates that AT&T is preparing to drop the MEdiaNet brand in favor of more sensibly-named “Messaging” and “Data” plans. Better yet, AT&T is rumored to be cutting $5 off their data plans.

The rumor has AT&T killing off all vestiges of the MEdiaNet brand, including MEdiaWorks and MEdiaBasic. And, in a move that’s sure to make the carrier’s unlimited data plans more accessible to the smartphone-using masses, AT&T is expected to reduce their unlimited messaging and data plan to $30/month. Additionally, unlimited data plan add-ons for FamilyTalk plans will cost $10 per line. The savings could amount to more than $100 in savings over the course of a typical two-year wireless contract.

We’re looking for AT&T to flip the switch on their new data plan pricing later this month – January 25, if you absolutely need a date to aim for.